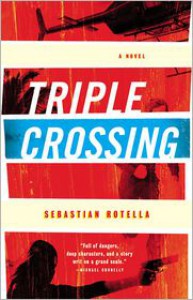 The border seethed on the edge of his sleep. Haunting him. Disembodied faces surging up out of the riverbed at him.

I picked this book up from the library because I was approved for the sequel on NetGalley. Recently I haven't had much time for reading but whenever I had a chance to pick this book up I was engrossed in the story. I do have to say that if you plan on reading this book and don't know some Spanish you might want to have Google translate handy (it doesn't have too much Spanish in it but there are phrases here and there).

This book follows two men who are on opposite ends of the U.S. Mexico border. Both are just trying to do their jobs the best that they can. Valentine Pescatore, a US border patrol agent, finds himself in a drug lord's crew and always in fear for his life and Leo Mendez, the chief of a Mexican police unit, finds himself on a journey to finally take down the drug lord. Their paths cross at times and they don't know whether they can trust the other just as readers don't know who to trust.

I alternated between liking both Valentine and Leo and being annoyed with both of them. There were certain parts in this book that I really didn't know who was trustworthy. I did feel sorry at first for Valentine but then felt he was too comfortable in the drug lord's gang. I felt that his romance with Isabel Puente sprang up too fast but am interested in seeing where it goes. For most of the book I felt Leo was a bit naive and too hard-headed. When he started to take matters into his own hands was when I really started to like him.

It is evident that Sebastian Rotella has knowledge of the region and culture covered in this book and that made it a richer story. The events towards the end will really get your heart racing and at times leave you wondering where everyone's loyalties lie. This was a great start to this series and I look forward to reading more about these characters.