A Memory of Violets 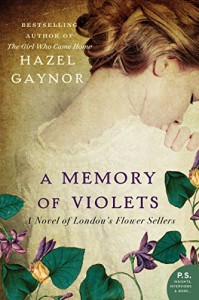 "That's the funny thing about sisters, ain't it," the driver continued. "Some can't stand the sight of each other and some can't bear to be apart."

I really enjoyed reading Hazel Gaynor's previous book, The Girl Who Came Home, so when I saw that this book was available as a Librarything Early Reviewers giveaway I immediately requested it. Hazel Gaynor created yet another hit with this book and she is now on my list of favorite authors.

This book is mainly about two pairs of sisters; Florrie and Rosie, and Tilly and Esther (although Esther herself isn't really prevalent in the story until the last 1/4th of it). The book switches back and forth in time to cover both stories and I found both of the storylines to be interesting. Florrie and Rosie's story will really pull at your heartstrings and Tilly and Esther's story, once it is fully revealed, will leave you shocked. I really loved how the storylines ended up connected towards the end of the book. All four of the girls were such interesting characters that I felt such a connection with each of them (yes even Esther, who wasn't as prevalent in the story as the other girls).

There were a few things that I didn't like about this book (which is why I didn't rate it 5 stars). I wasn't all that sold on the change in Edward's behavior. Yes I did like the man he became but I felt like his transformation was extreme and took place in too short a time period. I also didn't really like the interaction between Tilly and Herbert and didn't feel that those scenes were all that necessary.

It was clear that Hazel Gaynor did her research. These fictional flower girls in this story our based on the real work that John Groom did. After reading this book I am really interested in learning more about John Groom and his work. If you are looking for a really good story that highlights the relationship between sisters and also gives a glimpse into the life of a flower girl than this is a book for you. I can't wait to see what Hazel Gaynor writes next.