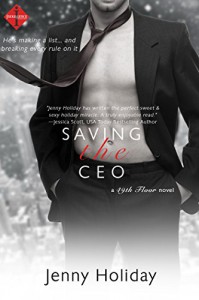 "Well, you can't drink 1955 Glenfarclas with tap water." She shuddered--the impulse was real, but she exaggerated the effect. "Toronto water is terrible. It comes from the lake, for heaven's sake."

I bought this while browsing through ebooks after I saw that it was only $0.99. I have recently been looking for more romance books to read and this one caught my eye. I ended up staying staying up super late to start and finish this in one sitting. While I feel there was a certain depth lacking in the characters, I do feel that this was a fun and light little romp of a book.

While I did overall like Cassie and Jack, I didn't feel like they were as fleshed out as they could have been. They both seemed to have some pain in their past in regards to their families those storylines weren't as opened up as I would have liked them to be. You definitely get to see more of Cassie's pain than Jack's. I did like the chemistry between the two of them and loved some of those steamy scenes (especially the hot tub scene, which had actual steam in it). At times Cassie came across as a bit naive and she became a bit annoying when she was calling her behavior at the beginning 'slutty.'

I wasn't altogether sold on the drama towards the end, it felt kind of weak. I just wish something stronger would have happened. It felt like it was thrown in because there needed to be conflict. I did like the sweet ending though. Overall I felt this was enjoyable but at times I would have liked more substance.