The Kings of London 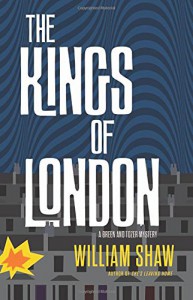 An unexplained death is something to occupy the mind.

Last year I read the first book in this series and really enjoyed it so I was pretty excited to read this book. Unfortunately I ended up liking the first book a bit more than this one. I don't feel like Breen and Tozer had the same chemistry and the investigation in this one could be boring at times. Also, don't even get me started on how annoying Breen's co-workers were in this one.

One of the things that I really enjoyed about the first book was Breen and Tozer's growing friendship. In this one at times they didn't seem as good of friends as before. Tozer seemed annoyed with Breen a lot and that had me annoyed with her. Ultimately Tozer is there for Breen when he needed her (and the other way around) but it just wasn't the same.

The investigation into the deaths had its interesting moments but there were definitely some pretty boring parts in the middle. Breen is pretty much on his own for most of this (except for occasional help from Tozer) and that really dragged his investigation out. There was some really good action towards the end as Breen closes in on a suspect.

I cannot stand Marilyn and barely tolerate Jones. The way Marilyn throws herself at Breen is pathetic. I wish he would have just rejected her once and for all. I was ecstatic at where she ended up at the end. As for Jones, he could be a real jerk at times.

Overall I did end up enjoying this book but felt that it didn't have the same magic as the first. I do look forward to reading more of this series. Thanks to Netgalley and the publisher for the galley.