Kill the Next One 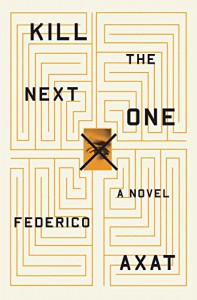 The description for this book seemed very interesting and something that I'd like to read. Unfortunately the events that are described in the description are actually a very small part of the book and end up not being the main focus of the book. Ultimately the book turns into something completely different than what I was expecting and even though I did stay interested in the story that was unfolding I would have liked the book to have been what I perceived it to have been based on the description.

Ted McKay has decided to kill himself and is about to do so until a stranger shows up at his door with a strange proposition for him. The stranger tells him that if he just kills two men that someone will kill him to spare his family from his suicide. Once Ted starts to go along with what the stranger asks of him he starts to realize these men and events are oddly familiar to him.

This story is way more than just about the murders that Ted must commit in order for someone to kill him. That was what really drew me to this book. I went along with this book when it started to turn into something else because I wanted to see where it was going. I did enjoy some of the twists and turns of this book but ultimately didn't really see why there was so much build-up in this book for a reveal that I didn't seem to care about. All this time I felt like we would find something big out about Ted and it was about someone else that I didn't care about one bit. I was just disappointed by the ending.