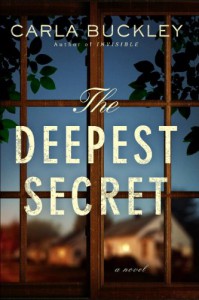 This book follows a theme that I have seen a lot in the past few years, how far a parent will go to protect their child. I really thought there would be a spark about this book that would elevate it above the rest but there really wasn't.

I was originally drawn to this book because one of the main characters, Tyler, is a teenage boy who has a rare medical condition that makes him extremely sensitive to UV rays. I was interested in reading about him and about how his family dealt with the disorder. Tyler's mother, Eve, is constantly there to help and protect Tyler.

A tragedy happens in this book that threatens Eve's family and she is forced to keep a secret to protect them. Maybe I am just morbid but I thought there would be something more than what happened, something bigger. I spent a lot of the book theorizing about things that might have happened and basically turned it into a mystery. While the events are somewhat mysterious, everything was pretty clear cut and I had a hard time accepting it as that. Maybe I just felt bad for Eve and didn't want anything to ruin her world.

From reading the synopsis of this book I thought that there would be more about the neighbors on the block and how complicated their lives were too. There really wasn't that much, just a few tiny glimpses into their lives. We did get to see some of Holly, but I never liked her much and would have rather read about the other neighbors.

I felt so much tension while reading this and I was just waiting for some big explosion to happen. There were some events towards the end of the book (like a fight between the neighbors) but nothing like a big explosion that I was expecting. Ultimately I knew how this was going to end, with the way it was set-up it could only end one way. The ending wasn't unsatisfying it was just kind of predictable. Overall it was a good book, it just wasn't the best book dealing with this topic.

[I received this book from a Librarything Early Reviewers Giveaway. The content of my review is not affected in any way by that.]

I have had to stop myself, many times, from looking towards the end of the book to see what happens so that I could relieve the tension I feel from reading this. I really don't think that everything was revealed about the big thing that happened. I just don't think that that is all there is to know about it. I keep coming up with theories in my mind as to what I think happened. I am waiting for something, or someone, in this book to snap.

I can't stand David and every time I reach a part from his point of view I want to rip it out of the book. There are certain characters that I would like to know more about and that I am interested in (Melissa, the Farnhams). I like Tyler, but I don't like him spending time with Holly. There is something odd about Holly and I feel like Tyler needs to stay away from her.

I was originally drawn to this book by the fact that the main character's son, Tyler, couldn't leave the house during the day due to a rare medical condition. That reminded me of the movie The Others. So far I have enjoyed the story and enjoyed getting to know the characters. I've just gotten to a big event in the book and unfortunately for me I have to put the book down because I have a motion to dismiss to work on. I am eager to read more of this book and see what direction the story will take.