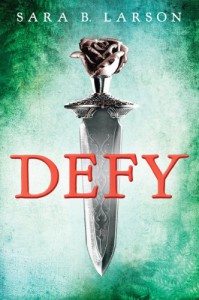 Sadly this does not live up to all the hype I have seen. I almost felt as though I was reading a different book than everyone else. When I started reading this it felt like I had started reading in the middle of a story. We start off knowing that there is a war going on but we don't know much about how it started (which does get explained a bit later in the story), why it started, and how long it has been going on. I also would have liked to have learned a bit more about the histories of the countries that were warring.

This book follows Alexa (or as she is called, Alex) as she disguises herself as a boy so that she can be on the Prince's guard. Alexa originally comes off as strong and that she can kick butt, but as the story progresses and some characters find out that she is a girl she does a sudden 180 and seems to become wimpy, whiny, and weak. I loved her when she was strong so I became progressively annoyed with her character as she began to break down. She did become stronger towards the end of the book so I was pleased with that.

I personally would not recommend this if you are hoping to read the next big book with a strong female protagonist, this just isn't it. This book could have all the parts to make it a great book but it fell short.

Thanks to NetGalley and the publisher for giving me a galley of this book.