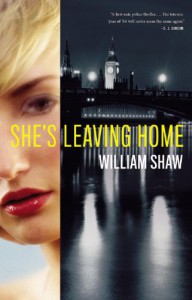 You can definitely see that this book takes place in 1968 just by the way that the male characters talk about and treat females, and by the way some characters are outright racist. The sexism and racism was a part of the culture back then (and some say it still is) and Shaw does a good job of highlighting it in the background of the story.

I have found myself annoyed with the main character Detective Sergeant Cathal Breen. In the book description it seems like he is an older policeman that is having trouble fitting in with the younger culture. Breen is only in his early thirties, which isn't old at all. To me Breen is having difficulties with life in general, although he does have a reason for it.

I love Constable Tozer. I like her energy and her eagerness to help. I worried for her because Breen wasn't that nice to her when they first met but I feel like she is slowly growing on Breen and I look forward to them hopefully becoming friends (God knows Breen could use a friend).

I'm off to read more.