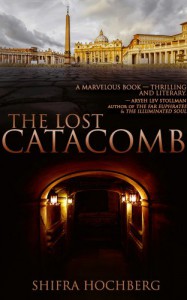 This was a solid debut about heartbreaking events. This book follows Nicola Page, an art historian, as she is invited to Rome on behalf of the Vatican to investigate a previously unknown catacomb that was just unearthed. While in Rome she will uncover the mysteries that surround this catacomb and also mysteries of her family's past.

I was caught up in the many mysteries in this book. I really enjoyed reading about the mystery behind the catacomb and seeing how it became uncovered and all of the action when the secrets were finally revealed. The mystery behind Elena's past was absolutely heartbreaking and was beautifully written. I connected so well with Elena and felt that the relationships and romances that she had were very believable. The reason I say that is because I never really connected with Nicola (in fact I didn't really like her that much) and I feel like her relationship with Bruno was underdeveloped and sickeningly sweet.

This book had some really great action at the end but I do feel that some of the events of the ending were a bit out there. Some of the ending was believable but then some of it seemed far-fetched. I did enjoy all the twists at the end and felt like they really kept me on the edge of my seat. I was pleased with the way that the story ended and I look forward to reading more from Shifra Hochberg in the future.

[I received this book from a Librarything Member's Giveaway. The content of my review is in no way affected by that.]