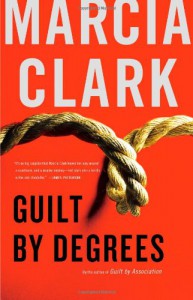 I was invited on NetGalley to read all the books of this series that have been released so far and I am a book addict so of course I grabbed them all eagerly. The first book in the series was okay and I had been hoping that the further along in the series I got the more I would like them but this one really had a mix of good aspects and bad aspects. I found that the good slightly outweighed the bad in this case.

While in the first book of the series I wasn't a big fan of Rachel Knight in this one I have really started to warm up to her and can understand why she is so stubborn. The more I read of this book the more I actually started to like Rachel Knight but then it is revealed to readers what happened in regards to her sister, Romy, and I just felt so horrible for her. It really explained some of her habits and personality traits that really had me annoyed before I knew. I still get annoyed at her careless disregard for her and others safety when she is trying to catch the bad guy but now I understand why she is that way.

I think I am probably in the minority when I say that I was actually happy to see where Rachel and Graden's relationship went in this book. What Graden did was not right and frankly I just don't like him and feel that Rachel should be with someone else. From the ending I feel like I will have to deal with more Graden which is okay considering it will probably help Rachel work out some of her issues.

One thing that I noticed while reading this book and the first one is that Rachel and Bailey's investigations into cases really seem to drag on very slowly. It is not that they are inept it just seems to take forever for the pieces to all connect. There was some action towards the end of this book that I just read through with no emotion because by the time we got to the action I was just too bored with the story and wanted the case to be wrapped up already. Speaking of the case being wrapped up, while I do feel as though there was some resolution I don't feel that it was satisfying. It just seemed like it was wrapped up this way so that there would be material available later on in this series.

Getting to see more into Rachel's past and getting to read about her teaming up with Bailey again tended to outweigh the slow pace of the plot and the occasional frustration at Rachel's lack of regard for anyone's safety. I will of course be continuing on with this series but I only hope that the next few have a faster moving plot.