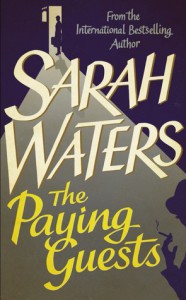 You said something to me once, I have never forgotten it, you said I like to be admired, do you remember? You said I would love anybody who admired me. Dont hate this hard thing I am about to say my darling but sometimes I think its you that would love anybody.

I don't want to give too much away about this book so some parts of my review might be a bit vague. The main character, Frances, still lives at home with her mother when they are forced to take borders in their house due to their lack of money. World War I has ended and they are the only two members of the family that are still alive. When Leonard and Lilian Barber come to live with Frances and her mother, none of them can foresee how their lives will take a drastic turn.

While reading this book I alternated between being frustrated with Frances and having pity for her. I was frustrated with her because I felt like she could have had a better life if she had really tried. I also pitied her because she had what seemed to be a boring and simple life. She had such strong feelings towards another character way too fast that it seemed more of restlessness with her life more than true feelings. Leonard and Lilian also were pretty frustrating at times. Lilian especially frustrated me because I always felt she was hiding something or holding something back.

The first half of the book went really slow. There was a lot of story building and character development in the first half and at times it made the book feel really long. The second half of the book had a much faster pace as some pretty important things happen. The book didn't feel too long during the second half. I felt a bit conflicted about the events at the end as I was happy with some aspects of it but I wasn't really happy with how certain characters ended up. I would recommend this book if you like strong story telling and don't mind a lot of story building.

I received this book from a Librarything Early Reviewers giveaway. That does not affect the content of my review.