Talk Sweetly to Me (The Brothers Sinister, #4.5) 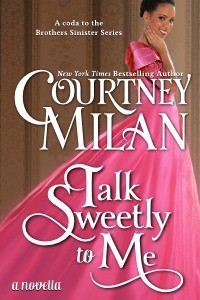 "He's never once offered to seduce me. I don't even think he's thought of it." "He's thought of it," Patricia said dryly. "And...frankly, Rose, the way he's talking to you? I don't think he'll even need to offer."

Rose Sweetly has a passion for mathematics and astronomy and she just wants to continue on with her work in both fields and be left alone. Stephen Shaughnessy, an advice columnist, has quite the reputation. Once Stephen takes an interest in Rose and her work in mathematics and astronomy Rose, to her dismay, will find herself finally being noticed by someone. She may try her hardest to not be affected by Stephen but she just can't stop those unwanted feelings.

Rose was just a genius and I loved her. I have always had somewhat of an interest, or a fascination, in astronomy, so getting to read about her work in astronomy was a treat for me. I am not as interested in mathematics but reading about that was also pretty interesting as well. Her passion for those things makes it interesting not only for Stephen but also for readers. I loved Stephen in the previous book in the series and was happy to learn that this novella would focus on him. He has a great sense of humor and it was great getting to see a softer and more serious side to him also when he was around Rose. Those two make a great pair, whether Rose was willing to admit it or not.

I just cannot fully explain how much I have loved reading this series. I highly recommend this series to historical romance fans.