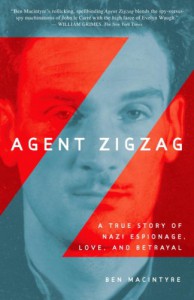 I haven't read a book by Ben Macintyre that I didn't enjoy. When I picked this out of my tbr jar I knew I was in for a true story so odd that it would make a great spy novel/movie. Eddie Chapman was quite the character and it was a pleasure reading about him.

At times it is hard to believe that a man like Eddie could and would become a double agent for England during WWII. You wouldn't expect a criminal to have been allowed such an important and dangerous role but besides being a criminal Eddie was also loyal and had a charisma that would draw others to him. I grew to really like Eddie while reading this and felt horrible for him towards the end with all that Ryde threw against him, even though I knew most of it was Eddie's fault.

Reading one of Macintyre's books is always an experience. With this book, and the others by Macintyre that I have read, I didn't get a dry telling of history but rather a colorful telling of the events and the people behind them. There are always these wonderfully quirky people highlighted and some hilarious events discussed throughout Macintyre's books.

I would highly recommend this book if you want to read about a double agent unlike no other.